Lukstudio submitted a design entry to the annual design challenge organized by Metal in Construction magazine and has been selected as the top finalists. This competition calls for a pedestrian bridge connecting Moynihan Station and Hudson Yards, New York’s largest urban development since Rockefeller Center.

Lukstudio believes that a bridge design is much more than a structural solution to connect destinations. It should be about creating pleasant urban spaces that invite the public to participate in their own ways. It should be a platform that provides choices to move and live around the city.  Its ultimate goal is to create a vibrant community that continues to flourish and evolve on its own. Therefore, we imagine the lives of the existing and future users in the neighborhood and develop a series of engaging venues for these people.

In direction to the Shed, the bridge connects diverse profiles of users including office workers, students, residents and visitors. In order to accommodate various speeds and means of travel, two routes are provided on separate levels between 8th and 9th Avenues. From the new plaza, the fast lane is a straight-forward path that allows time-conscious bikers and pedestrians to get from A to B quickly, while the leisure lane meanders between the north and south blocks and serves as a connecting scenic path.

The two routes merge into one platform at the Kaufman Hall and the Bus Terminal where several gathering spaces are designed to engage passengers and residents on a daily basis such as patio restaurants, a public outdoor library and an urban farming lot. With the availability of locally grown crops , a farmers market or a farm-to-table experience can happen regularly here.

The Nexus animates the public realm either by extending to unused building rooftops or empty ground lots. At the Meyers Parking Building, commuters can walk directly from the bridge to the rooftop with exterior stairs like the iconic fire escapes. Before connecting to the Highline junction at W. 30th Street, the bridge connects to a sports playground with a bleacher structure. The elevated pedestrians can disperse to the ground walking down the steps, watch a game while having their meal, or even practice during a break. A skate park half pipe is sculpted into the ground surrounding the basketball court, giving another urban exercise option while maximizing the spatial potential at this prime spot

The design intent is to integrate the bridge structure into the existing context. Therefore, a minimal and symbiotic structure has been proposed to ensure minimum obstacles beneath the bridge and maximum transparency above. The overall bridge is conceived as a series of triangles spanning between buildings for the structural stability. Based on the current context, we have identified three types of structural scenarios: a platform with column support, a platform cantilevered from existing building, and a suspended structure from existing building.

The Pavilion is a structural showpiece at the intersection of 9th Avenue and W 31st Street.  Nestled at the corner of an office building, it is pivotal in supporting the fast and leisure platforms between Moynihan Station and the US Postal Office, allowing the Nexus to leap between W31st and W30th Streets. In the same spirit of the minimal bridge, the Pavilion is composed of 4 triangles: two bigger ones suspended from the adjacent building forming a tent to provide shelter at the top, and two smaller ones brace the bottom platform into the overall structure. 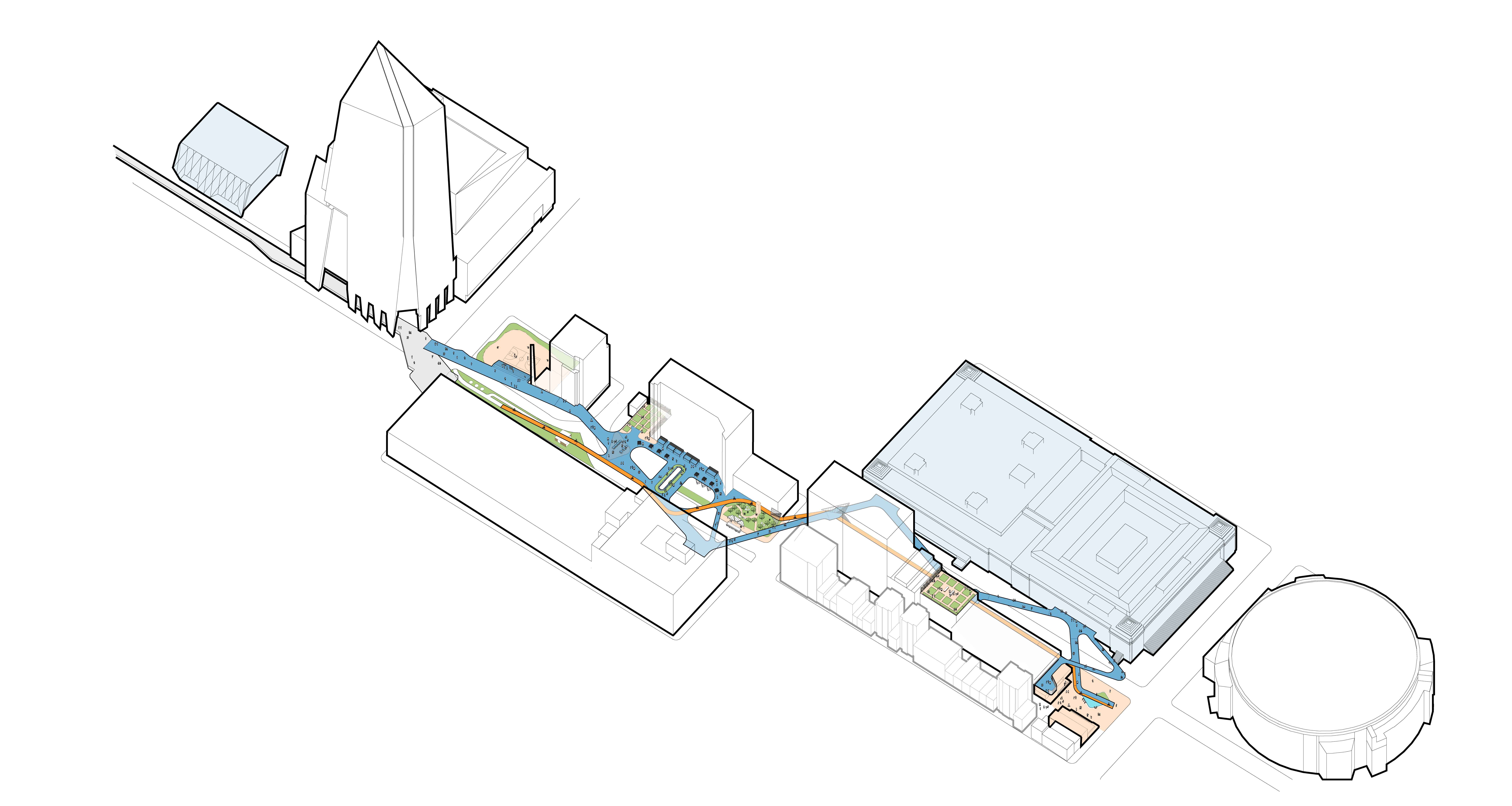 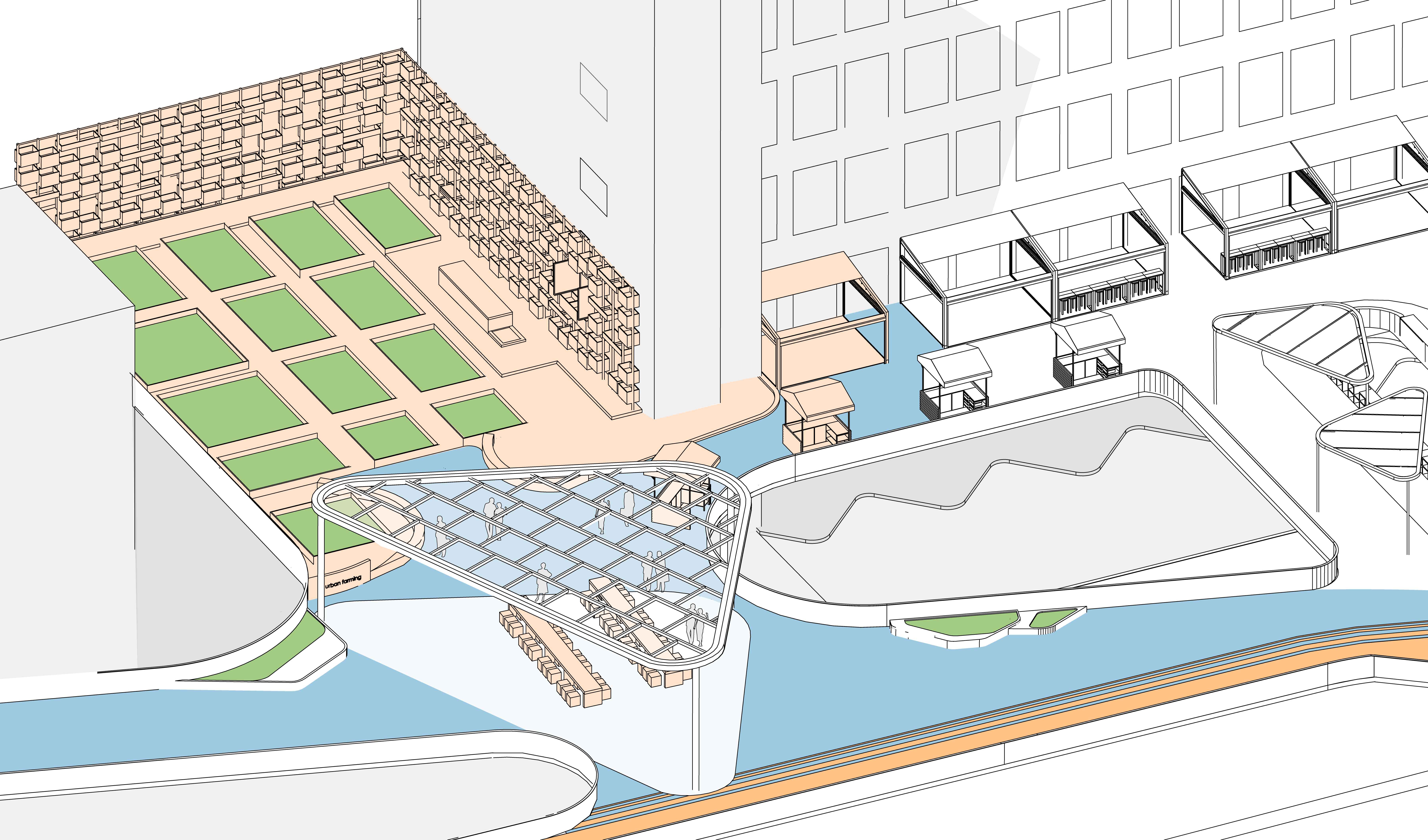 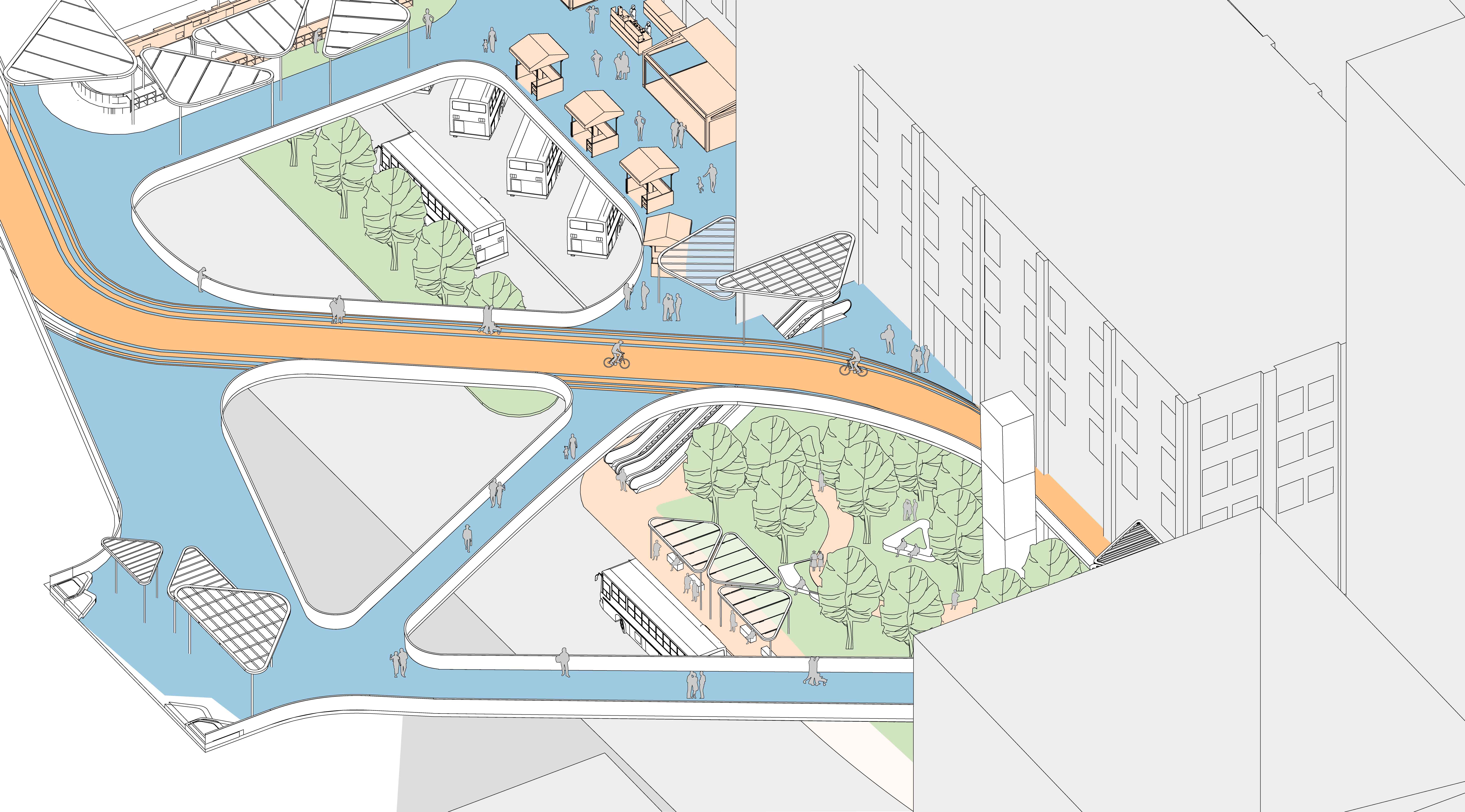 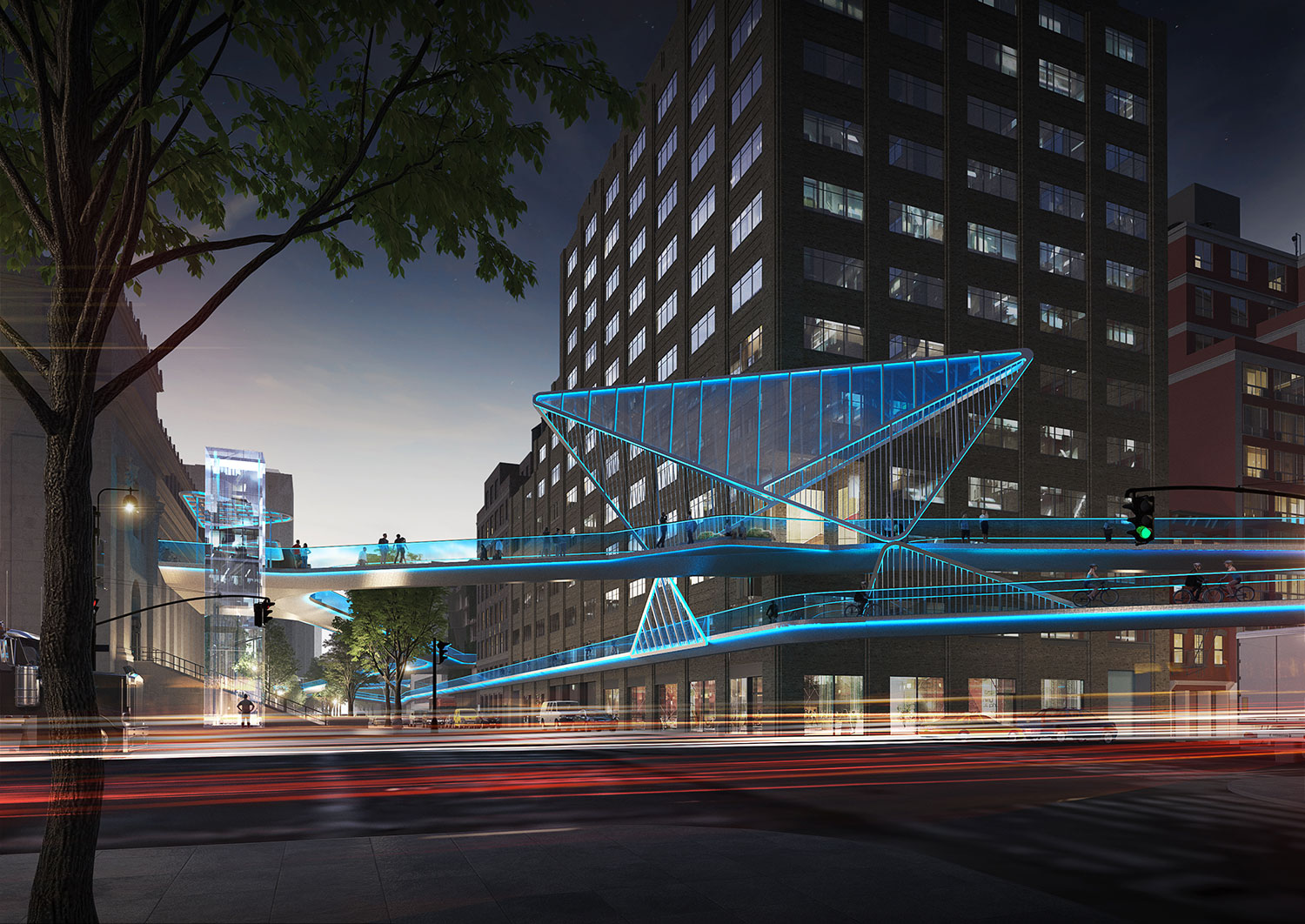 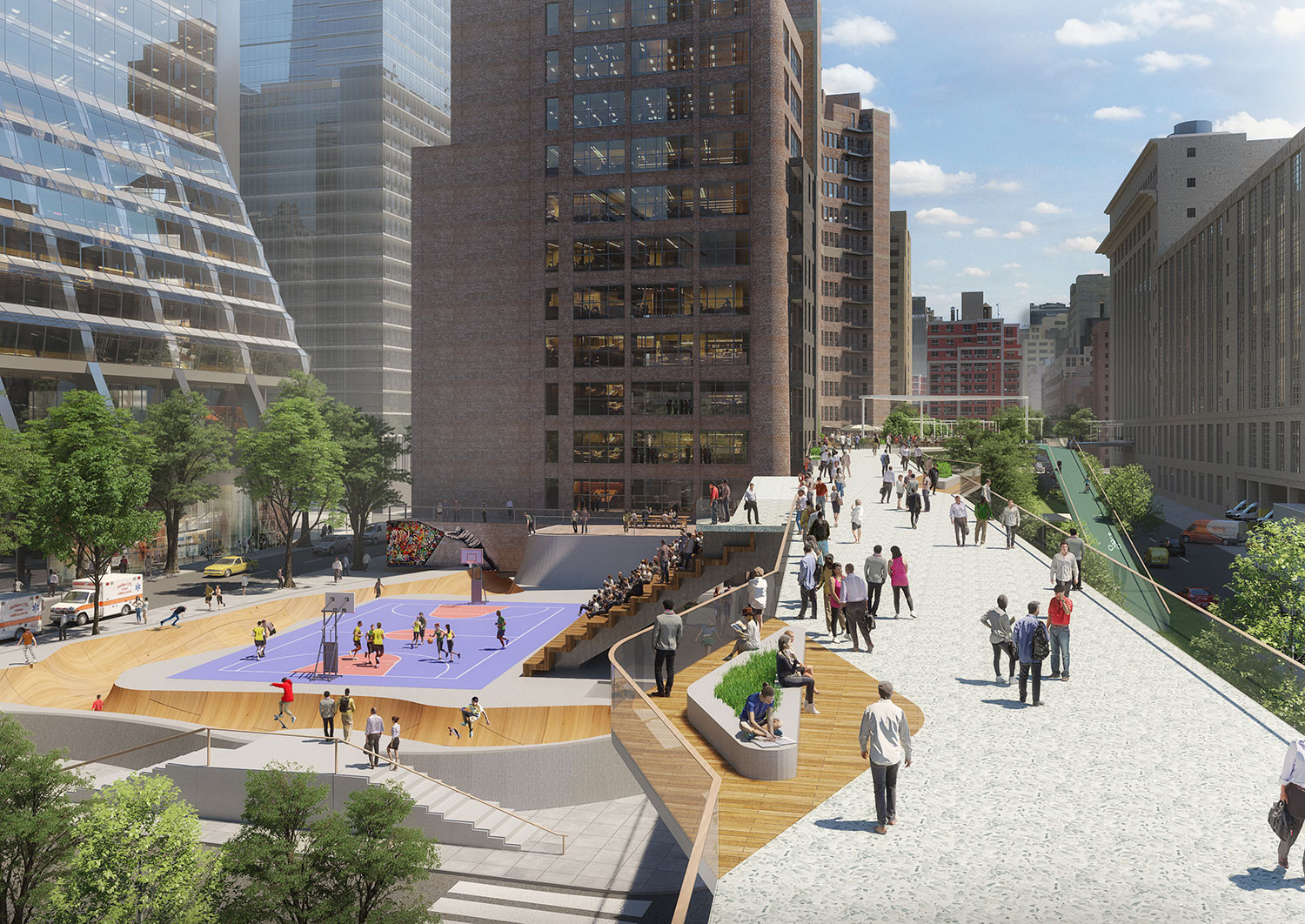 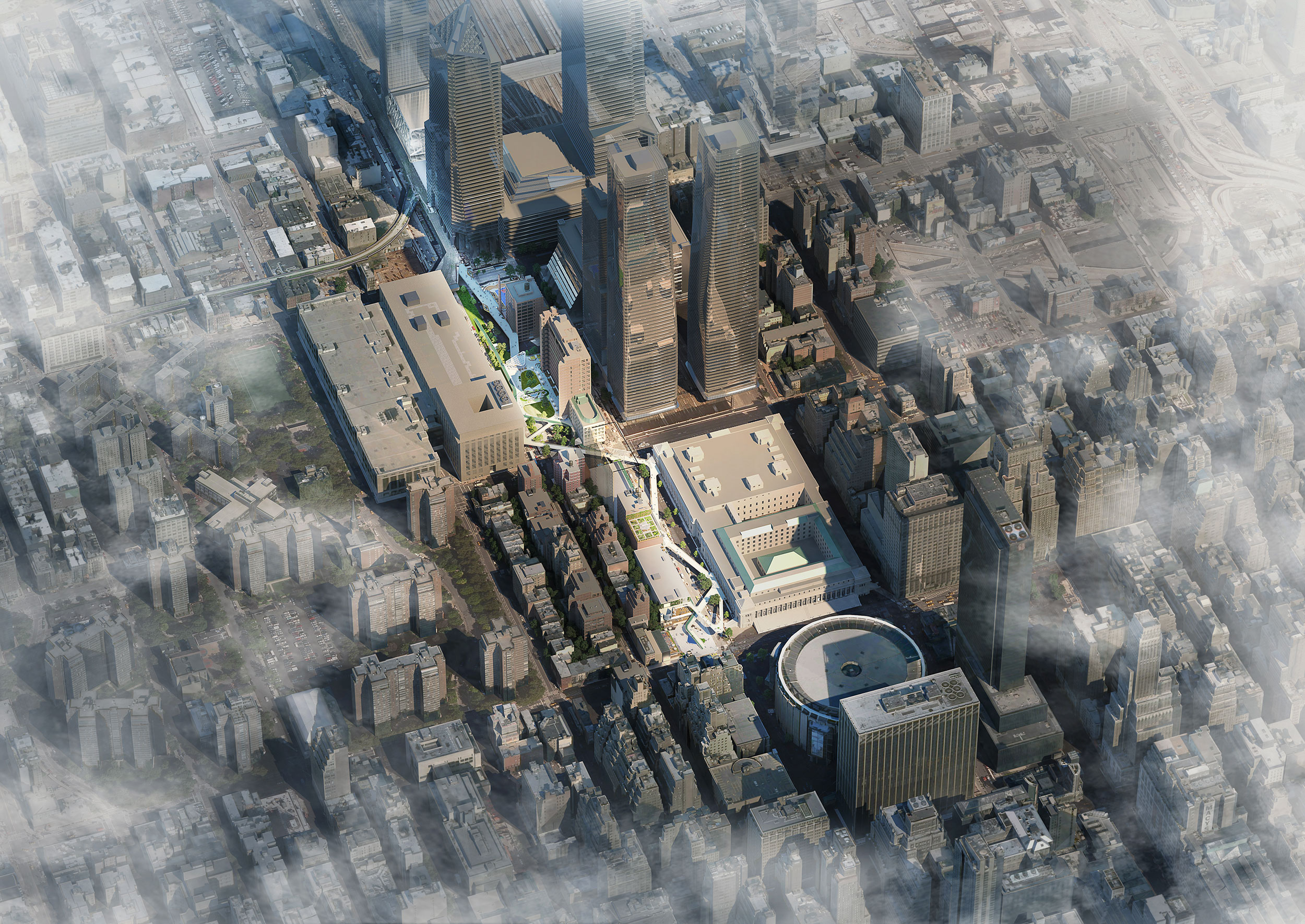